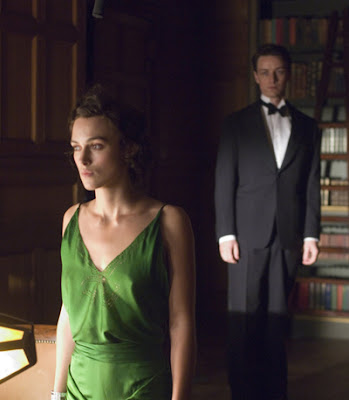 This measured, magnificent film by British director Joe Wright (based on the novel by Ian McEwen) is all the more remarkable when you consider that it's only his second feature.

A period piece, a love story and a meditation upon the nature of fiction itself, Atonement opens with the film's titles seemingly typed on the screen; an aural and visual reminder that what we are about to witness is a story - a fitting motif given that a story, an untruth told by a jealous young girl, is the event upon which the film's drama pivots.

Without going into detail about the film's plot (which you can read about elsewhere; and besides, I want to write this post quickly, as I have to bet up in less than five hours) I will say that Wright handles his emotionally-fraught narrative with restraint and subtle flair. Performances are excellent throughout, as is the sound design - driven, at key points, by the repetitive sound of typing to signifiy a shift in scene - and especially the cinematography. A long, complex and deeply moving sequence on the beach at Dunkirk, during WWII, is especially breathtaking, shot as it is in one long, beautiful, terrible, all-too-human take.

The film plays with point-of-view and time, providing overlapping, alternative viewpoints of key events as seen through the eyes of different characters; displays a mastery of cinema's visual language (a welcome nod to the intelligence of its audience); and in its concluding scenes and its coda, reminds us again, through a curtain flapping in a window and a heartfelt performance by the magnificent Vanessa Redgrave, reminds us of how strong something as malleable as fiction can be.

I haven't read McEwen's novel, but watching Atonement tonight makes me want to start reading it immediately.
Posted by richardwatts at 12:19 am

about the nature of fiction itself. For those gay inclined, you should also read McEwen's "The Comfort of Strangers."

After reading "Attonment" (I have yet to see the movies), I went to the library and got my hands on anything written by McEwen. He is a marvelous writer.

I had issues with the way the narrative moved back and forth. Not so much that it did, but it's execution.

It felt a little weird I guess, a couple of times I had to guess that the flashback was finished and we were back with the 'current' timeline.

That said, I think that's my only complaint. It's a small one at that. Such a great film.

That's acrually one of the the things I liked about the film, Tim - that instead of signalling the end of the flashbacks it trusted our intelligence, and that we could work such things out for ourselves...

And Ernesto, thanks for the tip - I'll definitely be checking out 'The Comfort of Strangers' when I finish 'Atonement'.

I would have liked a bit more about the immediate after effects of Robbie being taken away. But there's nothing in the book about it so I can't fault the film for that.